Perched on a hillside with a commanding, panoramic view of the ship-friendly waters of Somes Sound, it’s no surprise that the magnificent location for The Claremont Hotel was chosen by a retired sea captain. After Captain Jesse Pease made his last cargo run of sugar and molasses from Portland, Maine to New York in 1883, he commissioned a contractor to construct the hotel he’d always dreamed of running. 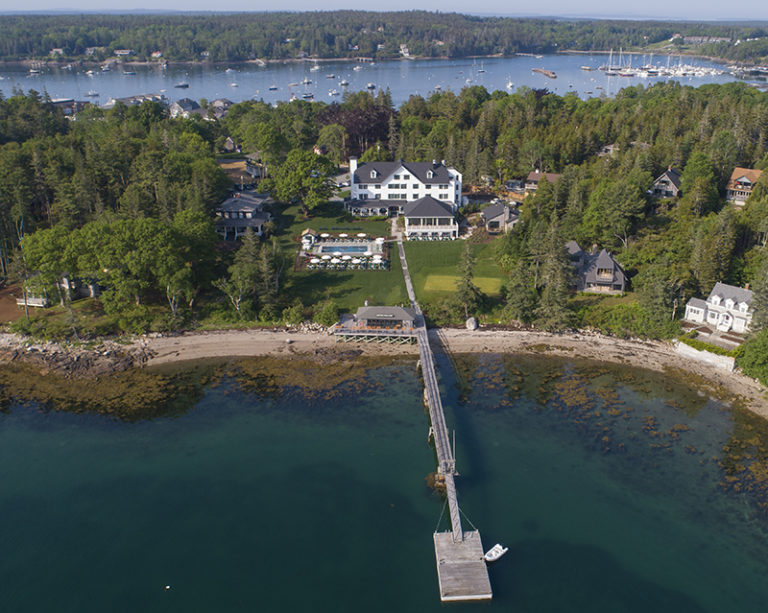 A New Age of Summer Travel Begins in Southwest Harbor

The Claremont Hotel opened the following year and quickly became a popular destination for wealthy families from New York, New Jersey, Connecticut, and Massachusetts to escape the summer heat. When Captain Pease passed away in 1901, his wife Grace took over as owner and manager before selling the hotel to Dr. Joseph D. Phillips in 1908. Grace stayed on as manager until her death in 1917, at which point Dr. Phillips assumed responsibility for day-to-day operations. The Phillips family ran the Claremont Hotel until 1968 when Lawrence Philips and his sister Elsie sold the property to Gertrude and Allen McCue.

In the late 1980s, the McCue’s transferred ownership of The Claremont Hotel to their son Bill who was already busy running a successful law practice in Portland. To ensure the hotel had an experienced, hands-on manager, Bill turned to the young man who first started working at The Claremont as a teenager to be his General Manager. That young man was Jay Madeira who, along with his two brothers and two sisters, formed an extraordinary hospitality team the McCue family depended on for the next forty years and who guests adored.

An Iconic Hotel Gets a Makeover

When the next generation of McCues decided to pursue other interests, Bill realized it was time for a change. In September, 2020 he sold The Claremont Hotel to Tim Harrington, the creative hospitality leader behind the revitalization of several historic properties in Kennebunkport including The Tides Beach Club, Hidden Pond, and Cape Arundel Inn and Resort.

So while a new era is beginning at The Claremont Hotel, we believe our attention to detail, commitment to excellence, and passion for creating unforgettable hospitality experiences will be a lasting tribute to every owner who came before us.

Can you imagine a dreamier vacation spot? We can't

Are you counting down the days until The Claremont

A luxurious escape awaits when we reopen our doors

The spectacular view? The lush landscaping? The se

This website uses cookies to improve your experience while you navigate through the website. Out of these, the cookies that are categorized as necessary are stored on your browser as they are essential for the working of basic functionalities of the website. We also use third-party cookies that help us analyze and understand how you use this website. These cookies will be stored in your browser only with your consent. You also have the option to opt-out of these cookies. But opting out of some of these cookies may affect your browsing experience.
Necessary Always Enabled
Necessary cookies are absolutely essential for the website to function properly. These cookies ensure basic functionalities and security features of the website, anonymously.
Functional
Functional cookies help to perform certain functionalities like sharing the content of the website on social media platforms, collect feedbacks, and other third-party features.
Performance
Performance cookies are used to understand and analyze the key performance indexes of the website which helps in delivering a better user experience for the visitors.
Analytics
Analytical cookies are used to understand how visitors interact with the website. These cookies help provide information on metrics the number of visitors, bounce rate, traffic source, etc.
Advertisement
Advertisement cookies are used to provide visitors with relevant ads and marketing campaigns. These cookies track visitors across websites and collect information to provide customized ads.
Others
Other uncategorized cookies are those that are being analyzed and have not been classified into a category as yet.
SAVE & ACCEPT

Vote in Travel + Leisure’s World’s Best Awards and be entered to win a dream vacation!